Our story began when Susan Severns, my very close friend who I’ve known as far back as grammar school when we were 11 years old, wanted to breed her Australian Shepherd, HOF WTCH-X Sweetgrass Painted Blue Skye PATDs OFTDs. Skye was a great-great-granddaughter through her mother’s side of my two ASCA Supreme Champion Stockdogs–Bull and Kit. Bull was ASCA’s second Supreme Champion Stockdog in 1991 and Kit had been the last Supreme Stockdog in 1995. So in 2010 we decided to breed Skye to my HOF WTCH-X Twin Oaks Black Bart II PATDcs AFTDcs, who was a great-great-grandson of both Bull and Kit and their litter sister Cicada. The litter produced eight puppies, one of which was Oakley, who Diana Land, DVM, of Land’s End, then purchased from Susan’s Sliding S Aussies.

I remember when Diana would bring Oakley to my Twin Oaks Ranch in Galt, California, as a 9- to 12-week-old puppy to watch my herding lessons. She was so “turned on” that with every stock movement in the arena she would dash to the end of her leash as if flanking to stop the stock. She would get so wound up that she would have to be moved out of sight of the stock. By six months of age Diana brought her to her first lesson. I put her in the round pen with sheep, as I start every young dog, and worked her myself. When I finished, I sensed that this was a dog that could be great. By the third lesson weeks later I couldn’t keep that opinion to myself and began to express to folks that Oakley had truly amazing potential. When she was old enough, Diana placed her in training with me for 90 straight days. It was like being a schoolteacher who has a genius in the class. But she was more than just smart; she was also fun to train and handle. And, oh my, was she instinctive.

Diana took her home at the completion of those 90 days and continued with largely once-a-week lessons as she prepared to trial her. Diana took her to various trials, including in Montana, as well as the 2012 and 2013 Nationals. Along the way, Oakley completed her Started titles on cattle, sheep, and ducks; notched a Most Promising Started Aussie honor; and then achieved her Open duck title and one leg in Open cattle.

While moving up to the Open division, Diana put her back in training with me for another 30 days. During that time I realized Oakley simply did not need to be trained like any other dog I had. She was already not only capable of doing any ranch chore for a dog but anything expected of an Advanced trial dog, including work our Post Advanced courses. But she needed to move up faster in our program so she could compete and be challenged at a higher level, much like that schoolkid genius who needs to go to college despite a young age. Diana accepted my offer and I purchased Oakley from her.

Even then I was thinking about her becoming my third Supreme Champion Stockdog. I felt she truly had what a dog needed to win that prestigious honor–to go to a Finals, compete in nine go-rounds, and come in first on all three stock. Having by that time trained and trialed two of them already, plus winning 20 other individual Finals Championships, I knew that it took a certain kind of dog, and that Oakley could be that dog.

So began our partnership. The first eight months I owned her she WTCH’d and earned enough points to qualify for the 2014 Cattle Finals in Bryan, Texas. She did well but, without enough miles under her, finished 12th. Coming in first that year was my Mother’s dog Vinny, WTCH Twin Oaks The Vin Man PATDc. But Oakley tightened her belt and at Nationals won High in Trial for cattle.

The following year we qualified on all three stock for the Shelbyville, Tennessee Finals. I could not have been more proud of her. The cattle were rank and disrespectful of a dog and we never seemed to get a break in the three draws we had. But Oakley gave all her heart to the job and the two of us battled the unwilling cattle through their required paces. She did all she could do and then some. We won Reserve Champion Cattle and Reserve Champion Ducks.

In the months leading to the 2016 Albany, Oregon Finals, Oakley became a seasoned trialer. She was so consistent throughout the whole year on every stock. She was tough on cattle that needed to be taught respect yet she could put on her ballerina slippers to work on ducks and sheep. That would come in handy for the challenges at the Finals because the stock were pretty much up there in degree of difficulty.

The first go-round was Course D and Oakley led the way–1st in cattle by 15 points, 1st in sheep by 3 points, and 1st in ducks by two points. Wow, what a way to start! Oakley was so on and we were completely in synch as a team. But I could not get overly confident with those scores because, with six more go-rounds to run, anything could happen.

The second go-round was Course B and we had a really bad draw in cattle. Oakley was right there mentally and we worked as a team and we did the best we could in the time frame. We finished 4th in the round but were still ranked 1st overall in cattle. We were 3rd in the round in sheep and again 1st in ducks. Going into the third and final go-round, Oakley was 1st in cattle by 15 points, 1st in ducks by one point, and 2nd in sheep, behind by one point.

The final go-round was Course F, a difficult course. As competitive as I am, I always check the scoreboard before each round. I want to know where I stand and whether I need to take risks or just stay consistent, depending on how far ahead or behind we were. A lot can change in the final go-round especially with using four scores from six judges, with the high and low thrown out. I had a significant lead on cattle but it was very close on sheep and ducks.

The sheep were typical of their type. The dog needed to be powerful, quiet, confident, and utilize deliberate control with an honest circle to cover them. Oakley had a phenomenal run, maybe her best ever on sheep. When those old stomping ewes tried to bully her, she let them know that they were no match for this Aussie. She won the stock by a stunning 81 points.

The ducks were a bit of a challenge to get out of the take pen and off the fence. The dog had to stay way off them but at the same time be free to respond to their every movement. Oakley put on her best tippy toe ballerina slippers and pink frilly skirt, walked her ducks through their paces, and won that stock by an impressive 59 points.

By the time the final cattle go-round approached, most dogs, and many handlers, were feeling the pressure. But this was no time to slack off. Once again, the cattle were challenging. They did not stay together, with most of the groups mixing small ones and big ones. But at least they were not nasty like the previous year’s Finals cattle. I was up early in the run order and the dogs sitting in 2nd and 3rd place were near the end of the draw. I had to protect a 15-point lead.

Oakley brought them out of the take pen quietly. When I then asked her to go between the stock and the fence to lift them toward obstacle #1, she clued me in to the fact that she was glad I saw it her way and yes that was a great plan and so did what I asked proficiently. Then I noticed something strange. The free-standing pen gate had been left open by the previous contestant! A number of thoughts rushed through my head about how I could handle my dog to keep the cattle from getting back to the back fence and at the same time close the gate. Then I heard “Stop!” and my name being called. The judges had seen the open gate too. As soon as I stopped Oakley and went over to the judges, the cattle, as expected, ran back to the fence. I was given a choice to either start over with this group or be given a new group and run after the next run. Naturally, since the current group already had rushed to the fence and knew they could get away with that, I chose being given a new group and would take the chance they might behave better. Well, so much for that line of reasoning, because the next group was the worst I had drawn in the whole Finals. For Oakley’s part, her patience with cattle who did not respect her had run thin. She was not going to take it anymore and she showed her fierceness.

I have so much to be thankful for and so many to thank. I especially thank God for all His guidance and His blessings that allow me to pursue this sport and to achieve this lifetime personal goal. None of this would have been possible without God’s blessings. I thank also my family and great friends for their support and participation in contributing to this wonderful breed that is the Australian Shepherd. I thank Diana too for allowing me to buy Oakley so this amazing little girl and I could pursue and fulfill our destinies together. There are two others who also need to be thanked: Love you, Bart and Skye, for making such an awesome Oakley!

Thank You, Sal Manna, for helping me organize my article. 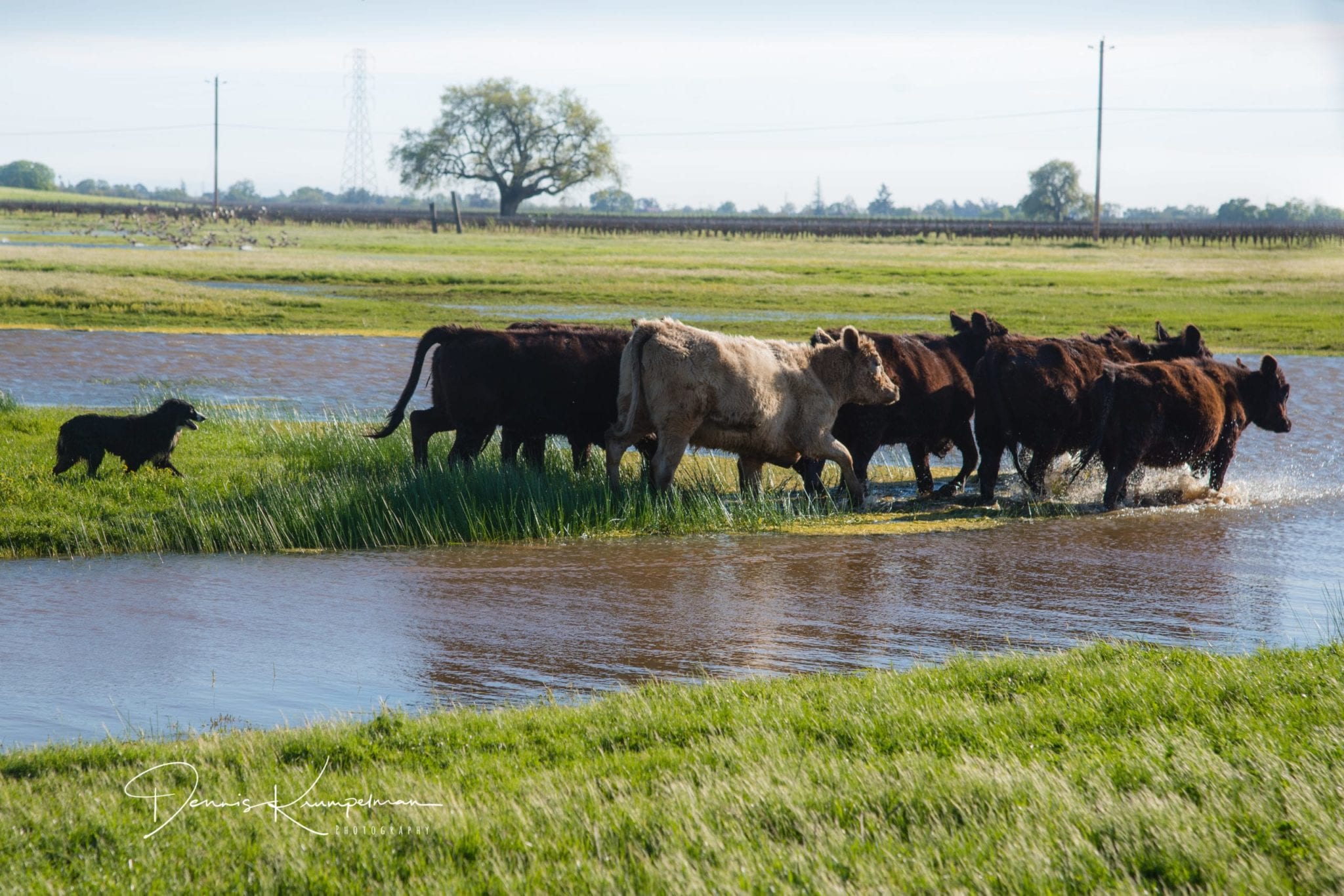 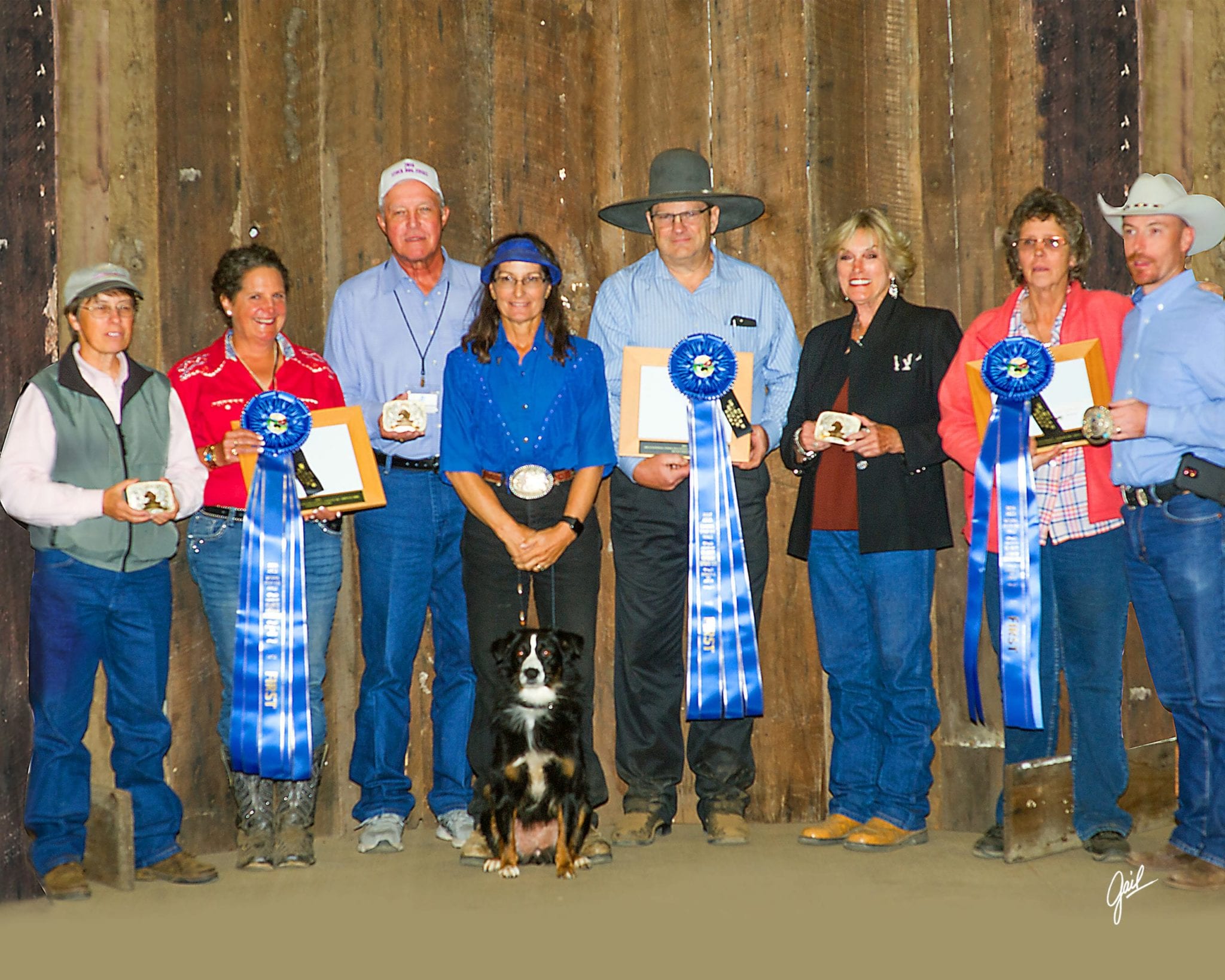 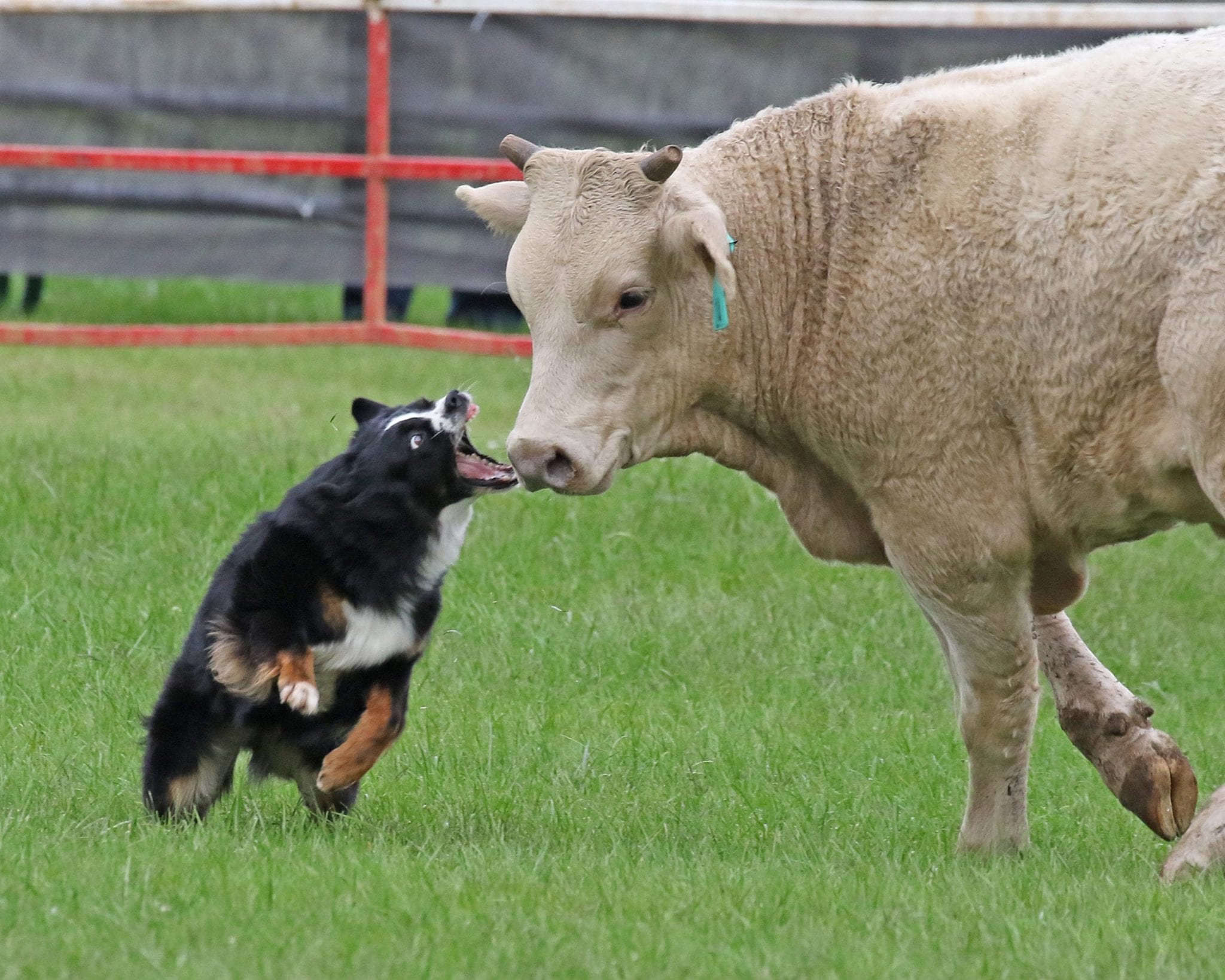 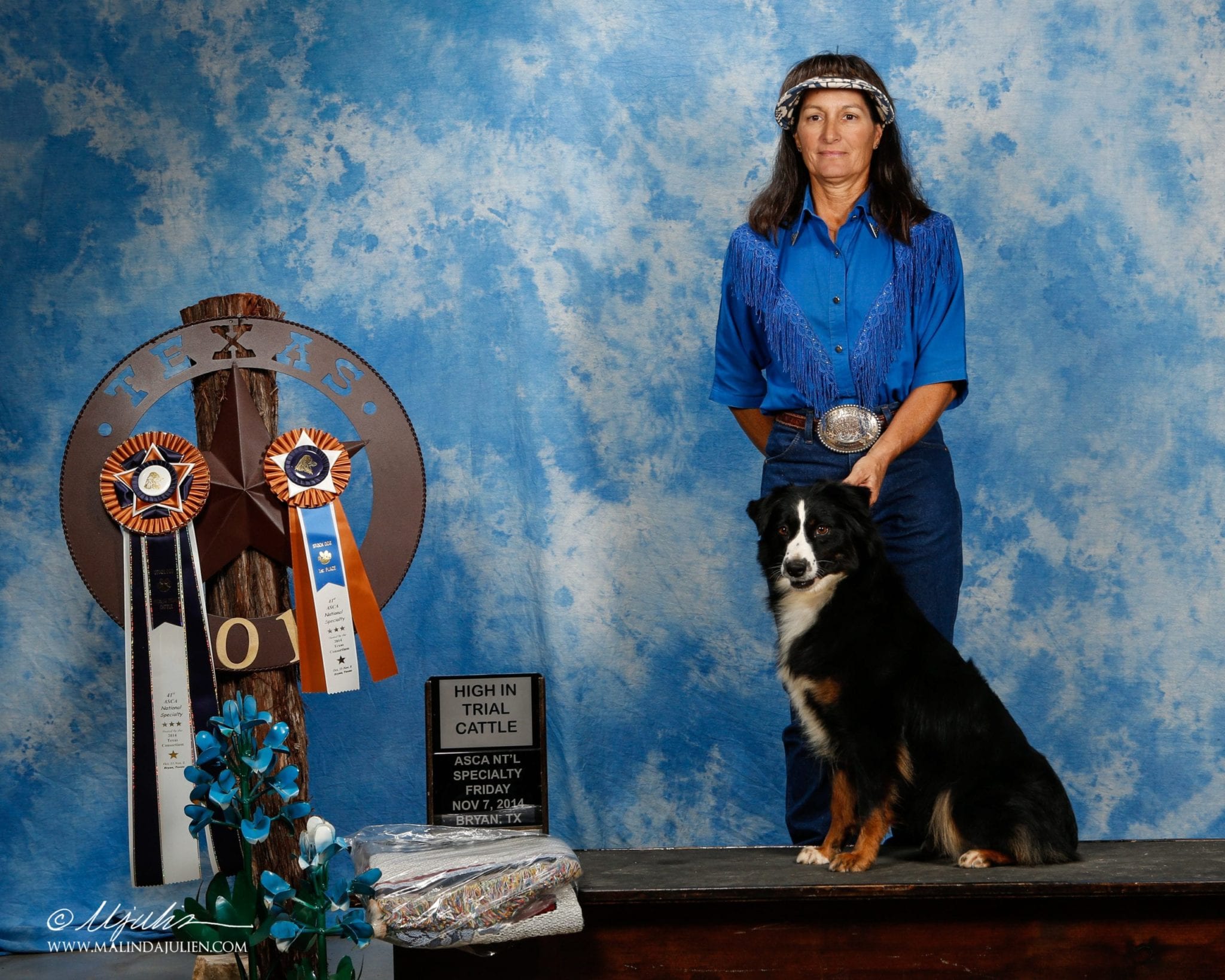 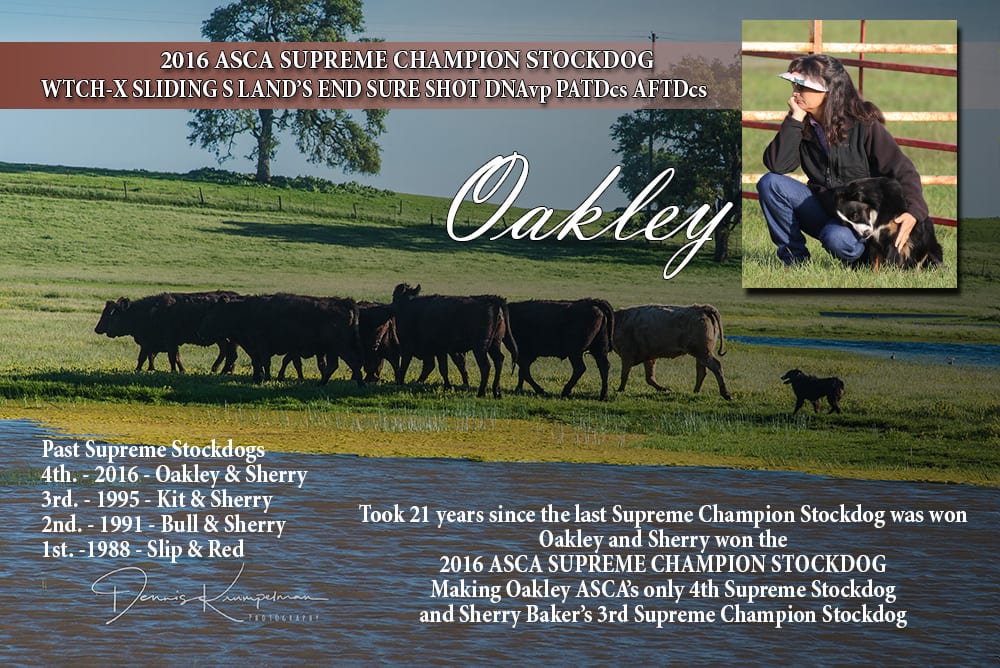